ExoticMachines
Hey Jerome, we are all still waiting for your meme since September 28.

How much longer do we all have to wait for your meme, Jerome??? 🤣
Click to expand...

It was a rhetorical statement? 🤷‍♂️ 🤣

I’m not going to go back and read through to see if this has been mentioned, but they removed the running lap times from the replay screen. My hope is that this is just a temporary omission.

PuffelPizza
Why is the Jeep shown in UCD in this image? Has it been moved from LCD to UCD???
Click to expand...

I wonder if cars that are being sold a lot by the community (marked as HOT) appear as used for other players... Not directly selling to others, but it might consider that.

I kinda wonder how much a special part would increase the value of a car? I got at least three Stroke Up S parts for the NSX Type R '02, and now that we can swap the GT500-spec NSX's engine into it, I don't feel like these parts are gonna be that useful. So I'm kinda wondering if maybe I should buy a few spares of the NSX Type R '02, install the Stroke Up S part in a couple of 'em, and then basically flip 'em? I'll probably leave myself one Stroke Up S, though, in case we eventually become able to swap the '02 NSX Type R's engine into something else. Maybe the S660? Or even the S2000. Who knows.

I'd say something similar of the DMC DeLorean S2. I got a Stroke Up S part for that, too, but why would you wanna tune the stock engine when I could win another Rampage engine and put that in instead? I mean, I already won a Rampage engine once, and decided to put it into the Amuse-tuned Z33, so if I won another, it's probably gonna go into the DeLorean S2, even if it means drastically limiting the power insofar that it becomes decent to drive.
Last edited: Nov 24, 2022

Don't see it noted anywhere yet, but for some reason, sector 2 and 3 of RA circuit experience have their names in Japanese in the English version. Sector 1 and the full lap have it properly in English though
J

RodSk8Dude
I wonder if cars that are being sold a lot by the community (marked as HOT) appear as used for other players... Not directly selling to others, but it might consider that.

Just tried selling some and you can only sell 1 car of any type per day. Going to take a while for those with 300+ NSXs to get the rewards 😂

A thought that has occurred to me with the selling feature being implemented the way it has - it will be a very useful data set for PD to gauge the type of cars being sold most frequently, and a way to tailor the car lists to lessen cars of that type in future updates or the next release.

If a lot of VGT or fantasy GR. cars get passed up, they might just consider relatively few are interested in the 'fantasy' efforts anymore.
Last edited: Nov 24, 2022
N

I think we finally got a solid update. Unfortunately half the update is temporarily. Will we get more new events in the 25th anniversary banner? Won the race on Spa and Willow Springs, but you only get the rewards one time.

Anyone already know the answer on the question for the livestream today? Don't know the question because i'm not watching the stream.

VXR
A thought that has occurred to me with the selling feature being implemented the way it has - it will be a very useful data set for PD to gauge the type of cars being sold most frequently, and a way to tailor the car lists to lessen cars of that type in future updates or the next release.

If a lot of VGT or fantasy GR. cars get passed up, they might just consider relatively few are interested in the 'fantasy' efforts anymore.
Click to expand...

PD would already have the data of which cars players purchase more though. Don't think they needed the car selling for that.

Oh, God, this is really gonna annoy me.

So all the events of this type have been called "Race of Turbo Sportscars" up until now with the Road Atlanta event, which is instead called "Turbo Sports Race" with a new description (which also applies to the other new events in this update). Problem is, the original 3 races have the same name and description as they used to...

Is this a sign of OCD by any chance?

So the anniversary update is supposed to last 40 days?

JTB10000
I don't really have anything to sell but having this feature is a small weight lifted off the idea that PD is holding back on ways to get credits to push mtx.

And we have a new track with rain and properly lit night (which isn't the standard for some reason)? Depending on what else is in the patch notes, I might call this a good update 😳
Click to expand...

So...turns out I was wrong. I don't understand, why aren't they giving any of the American tracks rain?

Hell yeah!!!!..Thank gawd for the "selling cars"!.. Just cleaned out the garage and gained a cool 10mil.. turned around and bought the '13 Ferrari Italia with mass cash on standby.. but still waiting for the invite for the Enzo (smh).. It was like X-mas this morning though, couldn't be happier with the purge, now all I got is MY cars in there now... yeah, good way to start the day..

Guys, can you win the prize money in the 25th Anniversary multiple times? Or just once? Thx in advance!

Alex p.
Guys, can you win the prize money in the 25th Anniversary multiple times? Or just once? Thx in advance!

Literally in the article.

You want me to read your article? Ok. Just say so.

You can only sell one car of the same model every 24 hours with the Car Valuation Service. If you attempt to appraise and sell duplicate cars within a 24 hour period you will be notified that “You can no longer sell copies of this model for today.” It is possible to Discard duplicate cars at no cost. 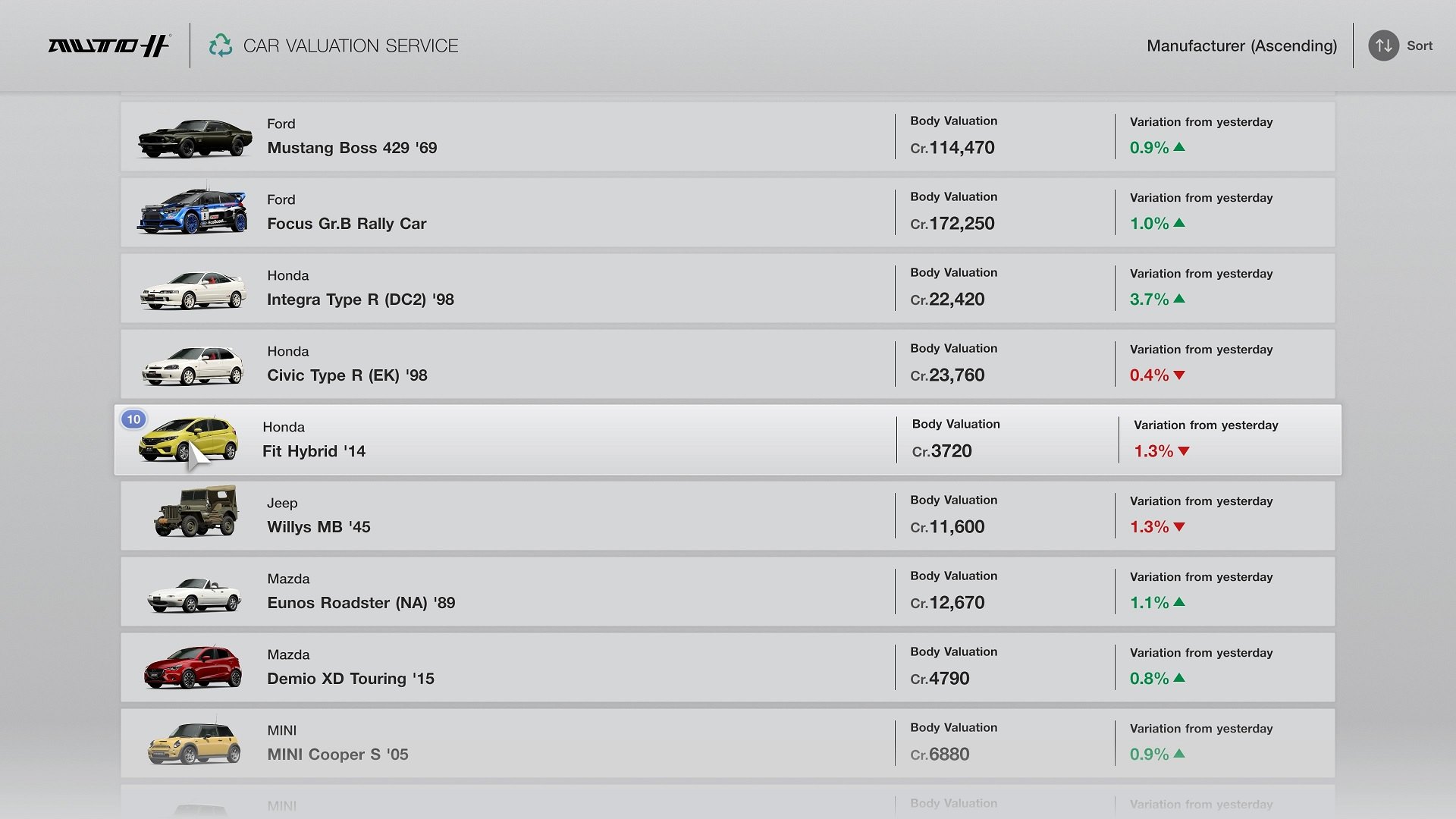 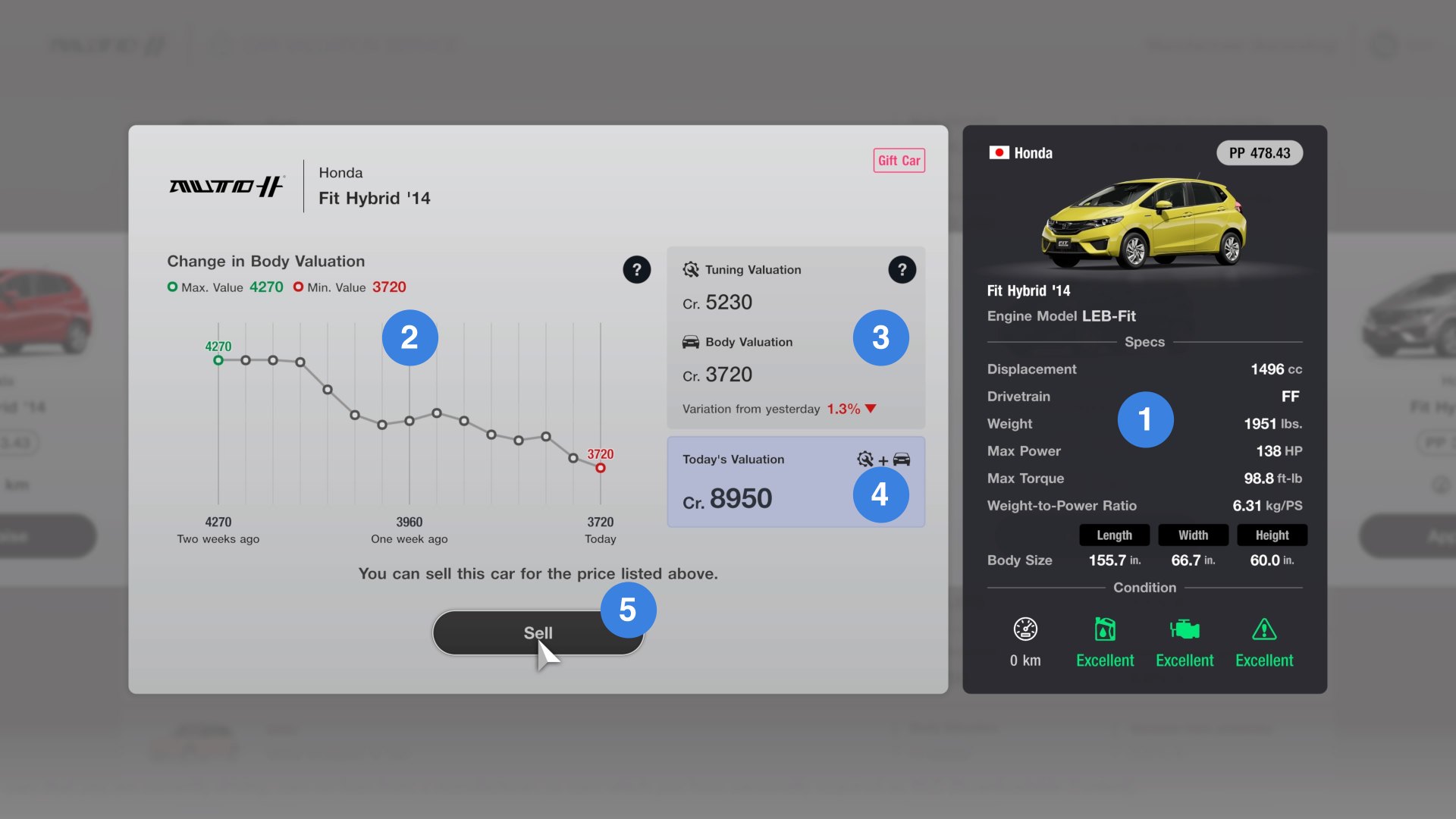 4. Today's Valuation
The total appraisal valuation is displayed here, based on the Body Valuation and any tuning costs. Please note, any Wheel, Paint, Custom Parts, Racing Parts and Other parts will be returned to you.
Click to expand...

Has anybody tried this yet?I wonder if we get the engine swap back into our garage.

with which car did you get the first place in the "gr1 series" race at Road Atlanta?

What car engine sounds have changed?

It seems I've lost the ability to adjust the brakes, has anyone else noticed this?

maetorn
1 pit for Spa is enough. Rain won't come so put slicks on. I gambled to inters at lap 7, still won the race by 16 secs
Click to expand...

Rain lasted like 7 laps on my run, it was glorious because I won by a minute, it was hard until I saw the rain coming and lost like 30 seconds but once the ai started to spaz out and spin out when it started pouring I was 1st place by like lap 7 all the way through I used the GR Supra so I had to put twice.
E

Jump_Ace
It was a rhetorical statement? 🤷‍♂️ 🤣

Just keep it that way because I will ask you the same question every year. 🤣

Yeah... It's also weird, both are never used.

Well if you notice on your tuning sheet, the acceleraton times are way off.

So I'm finally sitting down to see what the update entails, and we can finally sell our cars — it's about time.

Then, as I continue to read...

Officially known as the Car Valuation Service, it’s the most complicated version of this function seen in a Gran Turismo game to date, as it takes into account vehicle mileage, tuning state, and “market trends”; although this isn’t specifically detailed, that could suggest that if lots of players are selling the same car, prices will go down.

The valuation consists of two components: body valuation, which is the current appraised value of the car (at around 50% of its “base” price) and changes daily, and tuning valuation that takes into account any upgrades you have made. You’ll be able to sell the car for that total price; beware that you will lose the tuning parts, but keep any cosmetic changes made in GT Auto.

One fun twist is that you can only sell one example of a particular vehicle each day. Hopefully you don’t have too many Honda NSX Gr.B cars to shift...
Click to expand...

It's dumbfounding at this point. As so many of my criticisms begin, this is an idea that's utterly fantastic on paper, but in practice it amounts to nothing more than gatekeeping. Selling a car shouldn't be reliant on market trends, especially when said trends play no other role in the larger game. Even if it did, it would still be pointlessly contrived: we're playing a video game, I don't want to be bothered with economic pedantry, or to see individual values plummet because of artificial market saturation.

Stop with this obtuse 🤬. Just let me sell as many cars as I want, whenever I want and that be the end of it. What next? The value of the individual credit will fluctuate relative to in-game trade values, etc.? It would have been a better system overall if credit rewards adjusted alongside whatever random, arbitrary economy GT7 is portraying but that would never happen because there'd be no use to purchasing credits.

Terronium-12
What next? The value of the individual credit will fluctuate relative to in-game trade values, etc.?
Click to expand...

Edit: Actually I misread that. The Credits themselves won't see any fluctuation...probably 😅
Last edited: Nov 24, 2022