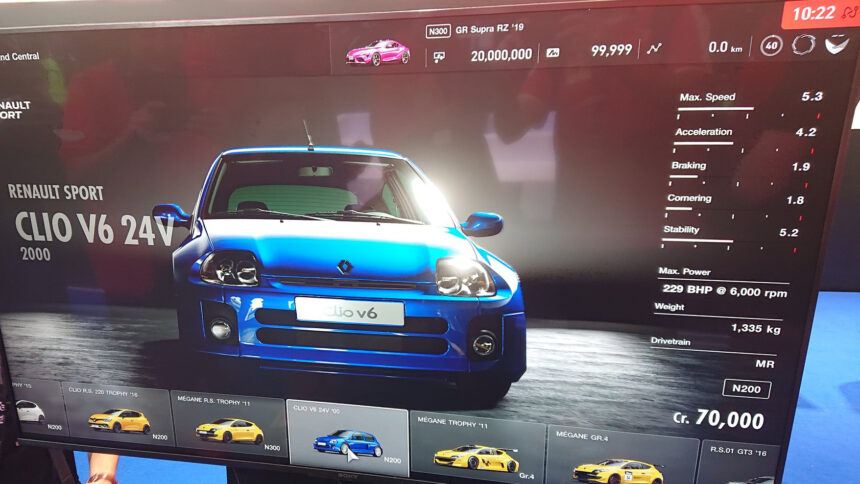 The latest World Tour stop is at the Nurburgring this weekend. There, one more competitor might qualify directly through to the year-ending World Final alongside Nicolas Rubilar. But, more importantly for the Gran Turismo community, the consoles at the event use the latest build of the game and that means we get a sneak preview of what’s to come in the near future.

Thanks to one of the competitors at the event, Mikail Hizal — better known as TRL_Lightning and the reigning European champion — we’re getting to see some of the vehicle content likely to arrive in the next official game update:

That new-to-series car is the Toyota Tundra TRD Pro. This is Toyota’s answer to the Ford F-150 Raptor that we already have in GT Sport. It’s a little down on power next to the Ford, at 379hp, but despite weighing in at some 5,600lb it’s also a little lighter. We can already imagine the pickup rivalry events at Tokyo Expressway…

Another headline car is the Renault Sport Clio V6. This has been a firm fan favorite since Gran Turismo 2 — a regular hot hatch, but with a three-liter V6 replacing the rear seats and driving 230hp to the rear wheels.

There’s more Toyota representation too, with the classic Sports 800 roadster. That would bring the Toyota road car count in the game to 11 (well, ten and the SF-R Racing Concept), lending further credence to the rumors of exclusivity. Rounding out this list of four is the classic 1969 Chevrolet Camaro Z28, which should get the Pony car fans going.

This is by no means a complete list of new cars — Hizal’s own Tweet references the fact that there may be others. With this and the possibility of weather-affected race tracks too, the next update — which we expect in late June — could be an impressive one.

GT Sport Game UpdatesNurburgringWorld Tour
190 Comments Discuss this post in our forums...
Can You Beat the Impossible Gran Turismo Quiz?

Gran Turismo Sport 573 Jan 20 by Andrew Evans
Keeping it on the island will be the key to this week’s three GT Sport Daily Races. The new set of events all pose a similar challenge, whereby a loss…

Gran Turismo Sport 573 Jan 13 by Andrew Evans
There’s a certain sibilance surrounding the circuits in this week’s set of Sport Mode sprints. The new selection of three races features some friends from right back when GT Sport…