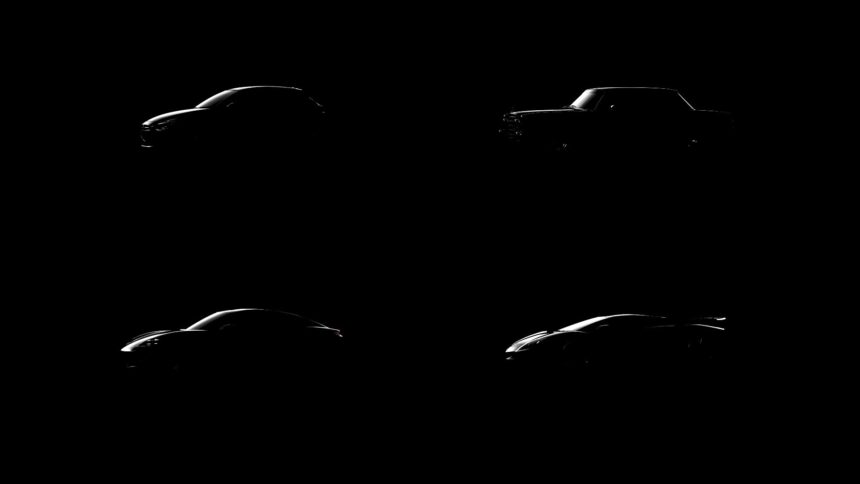 Although arguably entirely expected, it’s now confirmed: after this weekend’s World Tour event in Tokyo, GT Sport will get a new content update.

The confirmation came by the usual source of Kazunori Yamauchi’s own Twitter account. There the Polyphony Digital studio head confirmed not only the approximate timing, but some of the content too:

As long-term fans of Gran Turismo will know, this silhouette image is the traditional way Yamauchi teases the update contents. This time round there’s four cars — so far — and unusually their identities seem pretty clear.

The car in the bottom-left is one we’ve been expecting. It’s Porsche’s new Taycan Turbo S, the brand’s first electric vehicle, making its video game debut. The car in the top-left is a little slower: Mazda’s small hatchback, called 2 or Demio depending on market.

Over on the bottom-right we can see the Lamborghini Aventador SV, the lightweight version of Lamborghini’s top model. The last car is an unexpected surprise, with the Mercedes-Benz 300 SEL 6.3 AMG race car — nicknamed “Rote Sau”, or “Red Pig” — completing the set. All four cars are in fact making their GT series debut, which is a first for these now-monthly car packs, although we will have to wait for confirmation when the update arrives next week.

There is one car missing from the image however, and that’s the new Vision GT that Polyphony Digital will officially unveil in Tokyo tomorrow. That’s being kept under wraps for now, and we don’t know if it’ll make it into the October update.

As for other content in the update, it seems likely that there’ll be a circuit of some description. The schedule for this weekend’s Tokyo event contains two “TBA” races, which usually indicates unknown tracks — although we expect one will be a one-make race with that new Vision GT or the Taycan. We’ll have to wait to see whether this is a wholly new track, or the addition of wet weather conditions to an existing circuit. As the Rote Sau is most famous for its exploits at Spa-Francorchamps in 1971, it may be we’ll see the Belgian track in the game at last.

GTPlanet is on the ground in Tokyo, so stay tuned for more information on this as we get it.

Gran Turismo Sport 716 Aug 3 by Andrew Evans
Given the speed at which 2020 has been passing, it might be hard to believe that it’s the 31st Monday of the year. Nevertheless, a new Monday means a new…

Gran Turismo 7 239 Jul 29 by Andrew Evans
According to the UK-published Official PlayStation Magazine, Gran Turismo 7 is set to be a launch-window title for the PlayStation 5 console when it arrives later this year. We’ve been…

Gran Turismo Sport 716 Jul 27 by Andrew Evans
Monday is upon us yet again, and that means there’s a new set of GT Sport Daily Races for players to get their teeth into. In keeping with some recent…

Gran Turismo Sport 716 Jul 20 by Andrew Evans
It’s the start of a whole new week (yes, another one; sorry), which means that — along with many of us heading back to work again — there’s a new…