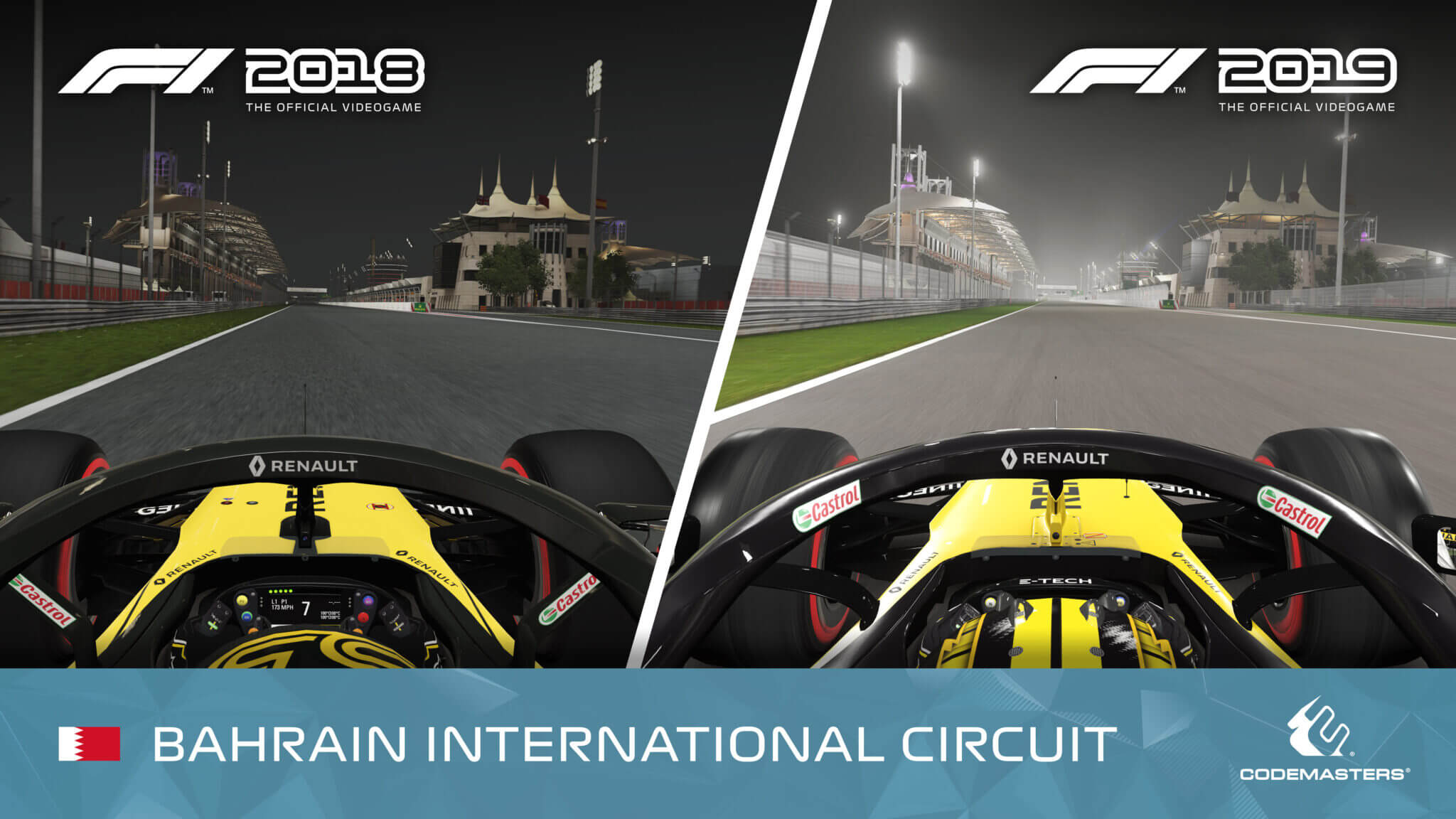 With just over three weeks until the release of F1 2019, Codemasters is showing off more of its official racer. The newest batch of images focus on the changes the team has made to nighttime driving.

When we played the game at a preview event last month, director Lee Mather told us Codemasters had put a lot of effort into improving the lighting system in 2019. Then we got a look at a night race at Bahrain, which drew a lot of double-takes from the community on account of its realism. But without a direct comparison, it was hard to tell what Codies had done to achieve this.

Well, wonder no more, as the developer has done just that: provided a direct comparison. Lining up still images of F1 2019 against last year’s title, it’s clear how the team has breathed life into the visuals. Take a look at the lead image or the one below: 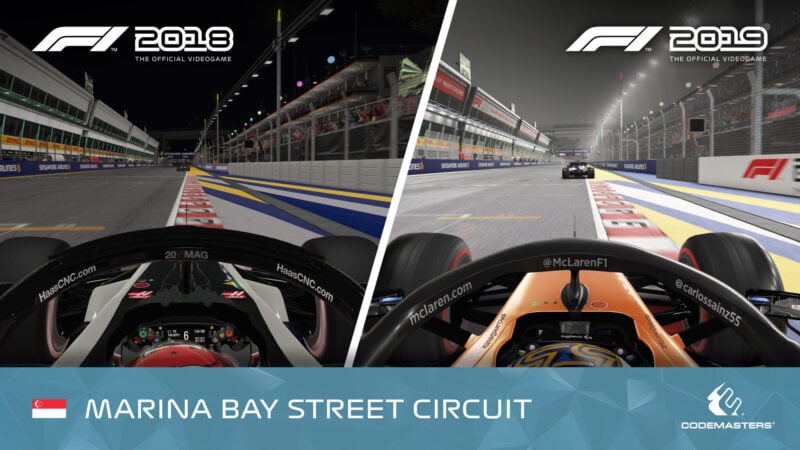 The most noticeable change is one of atmospherics: there’s a palpable sense of fog, of air density in ‘19. The glow of overhead lights is now a lot brighter. This increased brightness bumps the contrast up over the darker parts of the image too.

Other aspects like the increased reflections and greater tire detail also stand out.

Taken on their own, these details don’t drastically alter much. But as a whole, they do bring F1 2019 up another level in terms of visuals. It shows there’s still life in Codie’s in-house Ego engine yet.

Other changes to this year’s game include the inclusion of the Formula 2 series and — somewhat controversially — microtransactions.

F1 2019 releases later this month on June 28. Those that pick up the special Legends Edition, which features the epic Senna versus Prost rivalry, will get to start their careers 72 hours early.

Andrew Evans · Jun 5, 2019· Comments
Motorsport is proving just about impossible to stage right now, with quarantine measures, travel restrictions, and even just concern for the safety of drivers, team personnel and fans. With the backdrop of the current global climate, esports has really started to take its chance to shine.

Michael Leary · Jun 5, 2019· Comments
If you have yet to take last year’s Formula One game for a spin, now is the perfect time. There’s now a free trial of F1 2019 available on Steam, Xbox Live, and the PlayStation Store, until March 18. That gives players eight days to dive into Codemasters’ 2019 F1 effort and see what all the fuss is about.

Andrew Evans · Jun 5, 2019· Comments
F1 fans, your long winter doldrums are nearly over. The 2020 Formula One World Championship gets underway this weekend with the traditional curtain-raiser in Australia.

Andrew Evans · Jun 5, 2019· Comments
The F1 Esports New Balance Pro Series reaches its climax this evening, and for the first time in three years there’ll be a new champion lifting the trophy.

Michael Leary · Jun 5, 2019· Comments
‘Tis the season to be streaming. With the holiday season in the air, Sony has added some new games to its PlayStation Now cloud gaming service. For sim-racing fans, one game in particular stands out among the others.

Michael Leary · Jun 5, 2019· Comments
The latest update for F1 2019 is now available on the PC and PlayStation 4 platforms. Version 1.08, dubbed the “Visual Update”, brings updated liveries and sponsor logos to all cars in the game.

Kyle Patrick · Jun 5, 2019· Comments
The latest version of F1 2019 is now available across all platforms. Version 1.07 follows a quick succession of updates since the game’s late-June release, focusing in on detail changes.

Kyle Patrick · Jun 5, 2019· Comments
The latest patch for F1 2019 landed on PC and PlayStation 4 earlier this week. It’s a small one, bringing with it a handful of useful improvements to Codemasters’ latest.