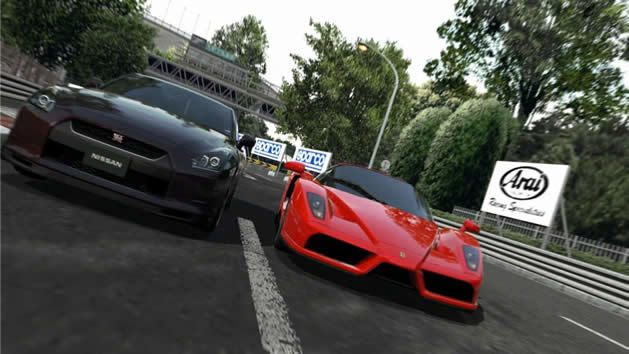 This little game just keeps looking better!  Take a closer look at the Ferrari Enzo and the Nissan GTR V-Spec in these impressive new screenshots.  For the skeptics, take a look at this gameplay video footage.

As you’ve probably heard by now, Sony has just announced the true successor to the PSP. Code-named the “NGP” (Next Generation Portable), it features some impressive hardware specs and the titles announced so far look great. Popular games such as Uncharted, Killzone, and Call of Duty were all confirmed to arrive on the NGP when it’s released at the end of this year, but one special franchise was nowhere to be found this time: Gran Turismo...

Sony hosted a small group of media at their Benelux headquarters in Amsterdam, yesterday, and our own Blitz187 was on hand to catch any and all new tidbits of information that might emerge (this event took place before the delay was officially confirmed). As usual, Sony was extremely tight-lipped about the game’s details and did not use the event to reveal any major new features...

Polyphony Digital has updated their sales figures for the Gran Turismo franchise, and the company’s latest title, GT PSP is now on the list. In the three months since its release on October 1st, 2009, it has sold more than 1.8 million copies around the world, making it the sixth-best selling title on Sony’s portable console...

Remember the “Ultimate Gran Turismo Fan” contest Sony held back in November? They set out out to find the most dedicated fans of the series, and this past Friday, the winners were finally announced. First place went to Michael Blevins of Colorado, who started dirt track racing after years of playing GT, and second went to Samuel Sligh III, a passionate Ferrari fan from North Carolina. For their dedication to the series, they’ve been awarded the two very sweet racing suits and helmets worn by Rhys Millen and Tanner Foust in the GT PSP commercial filmed at Laguna Seca...