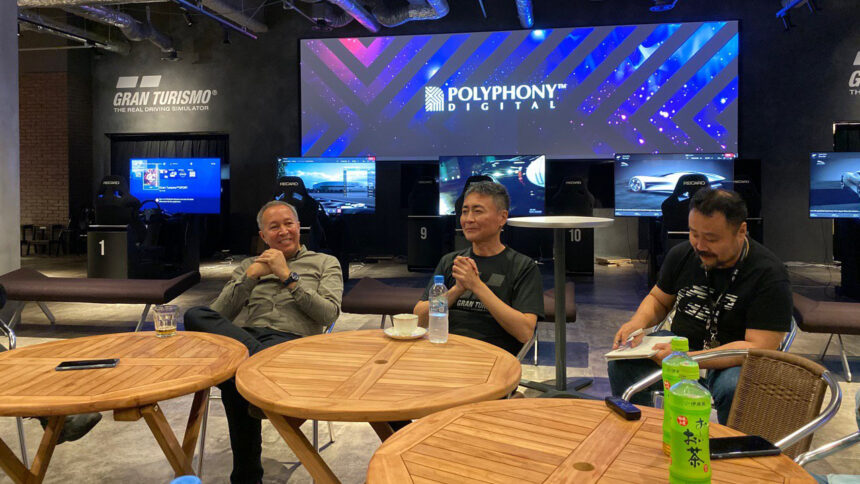 Since GT Sport launched two years ago, fans have been wondering where Circuit de Spa-Francorchamps went. The famous, challenging strip of asphalt in the Belgian Ardennes featured in both Gran Turismo 5 (as paid DLC) and Gran Turismo 6, but has been absent from the PS4 version… until now.

In an interview held at Polyphony Digital’s new headquarters in Tokyo, Kazunori Yamauchi confirmed that the track will likely be on our home consoles with the next update, arriving next week. As part of a round table discussion, one of our media colleagues addressed the Spa question. Yamauchi’s answer was right to the point:

“Spa I think will probably be playable next week.”

That’s good news for fans who’ve been asking about the track like Bart Simpson wondering about his elephant. It’s certainly been a long-running saga, with the initial signs being poor. Even earlier this year it looked like an impasse over licensing wouldn’t see the circuit’s return any time soon. The track’s owners were reportedly asking a lot of money — understandable as it’s a famous track that’s expensive to maintain — and the studio couldn’t justify the cost compared to other circuits.

However this deadlock seemed to break two months back. Regular viewers will recall that we first saw the track in GT Sport back in August, at the live event in New York. Surprisingly the track didn’t arrive in the post-event update. That’s an unusual state of affairs for freshly revealed content, but viewers will have noted that some of the track’s details — such as the start lights on the gantry — didn’t seem to function correctly.

This turns out to have been an apt observation, explaining why the track didn’t hit the public versions of the game to date. Yamauchi noted:

“The level we can use these tracks at the World Tour — at these events only — as opposed to something that will be released on a consumer level is very different. There is a process in between where we have to get down and check and double-check the quality.”

It appears that Polyphony Digital has finished the quality control for the circuit and, at long last, it’ll hit GT Sport with the update next week.

Stay tuned to GTPlanet for more on this, and other news from the World Tour Tokyo event.

Gran Turismo Sport 109 Sep 24 by Andrew Evans
Players waking up to GT Sport this morning will find a fresh set of Time Trials starting today, to challenge them over the next two weeks. It’s a mixed surface…

Gran Turismo Sport 494 Sep 21 by Andrew Evans
You’ll get a rare chance to test out your oval racing skills in this week’s GT Sport Daily Races, with a new set of three events. Our headline event comes…

Gran Turismo Sport 494 Sep 14 by Andrew Evans
This week’s GT Sport Daily Races, have an unusual twist with two events where the car is provided to you — and in both cases it’s a pick and mix,…

Gran Turismo Series 180 Sep 12 by Andrew Evans
Back in August 2018, we brought you some rather interesting information on the inner workings of the Gran Turismo series: after two decades of almost exclusive in-house development, Polyphony Digital…

Gran Turismo Sport 109 Sep 10 by Andrew Evans
There’s a fresh set of GT Sport Time Trials starting today, and covering the next two weeks. It’s fair to say that the challenges on offer, though both set at…

Gran Turismo Sport 494 Sep 7 by Andrew Evans
There’s no taking things slowly in this week’s GT Sport Daily Races, as all three events put you in race cars. Race A sees a return of the front-wheel drive…