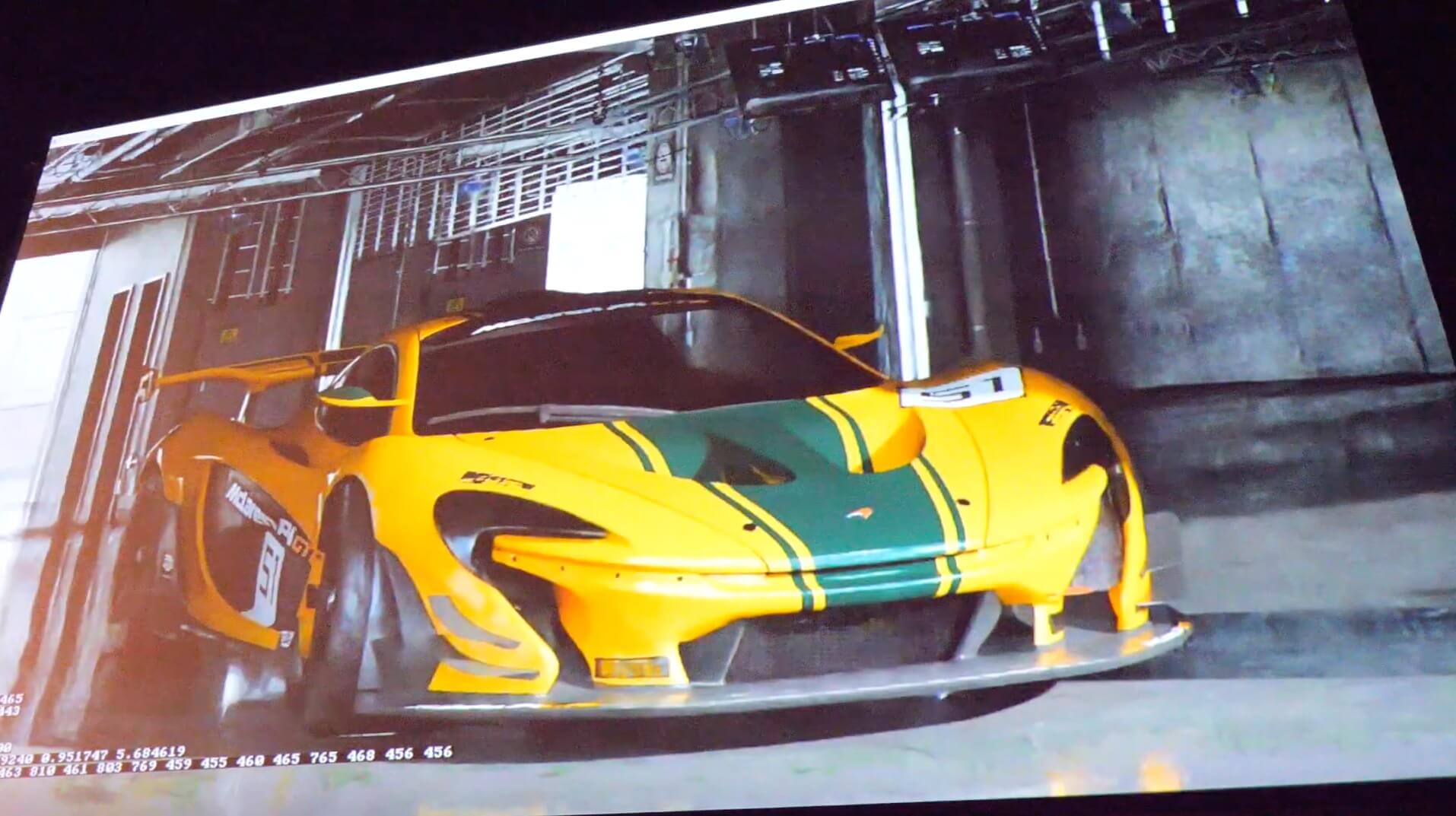 Technical presentations recently published by Polyphony Digital engineers have given us a fascinating look at the work that goes on behind the scenes at the secretive development studio.

Just last week, we learned how Gran Turismo Sport implements HDR and Wide Color, and before that we discovered the company was working on the curious case of procedurally-generated cars.

One of the most interesting was a presentation back in September which discussed GT Sport’s “Iris” rendering system, which utilizes “baked” (or pre-rendered) ray tracing to generate lighting conditions in the track environments.

It is very impressive, but it is not the holy grail, which is ray traced lighting in real-time that reacts to player’s inputs. That is something we have not seen in a Gran Turismo environment… until now.

Unlike the other presentations which consisted only of technical slides, we are fortunate to have a complete video of the event in English, recorded by VRonWEBMEDIA and shared in our forums by GTPlanet user dogw10.

The ray tracing demo, which begins around the 7:45 mark in the video, first shows the Jaguar E-TYPE Coupe. Before proceeding, the presenter confirms he is “going to show the latest technology here, real-time ray tracing,” and notes that “everything is computed in real-time.”

He demonstrates one of the hallmarks of ray tracing on the E-TYPE’s chrome bumper: self-reflection. As you can see, the car’s red paint and turn signal is accurately reflected in the bumper. He also moves both the camera and light source to show how the reflections change. 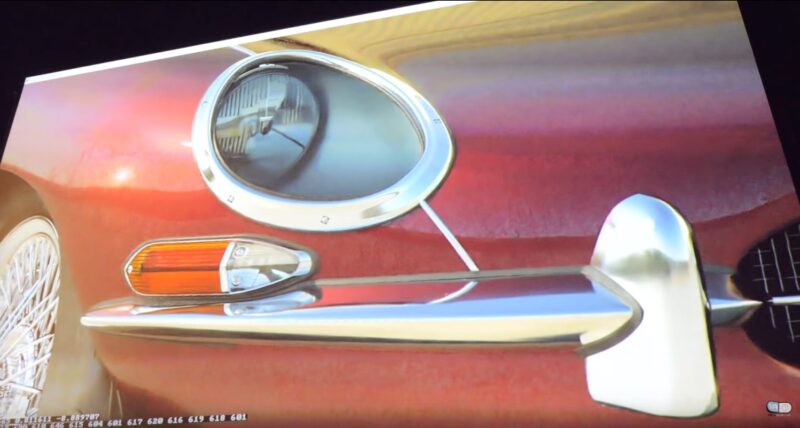 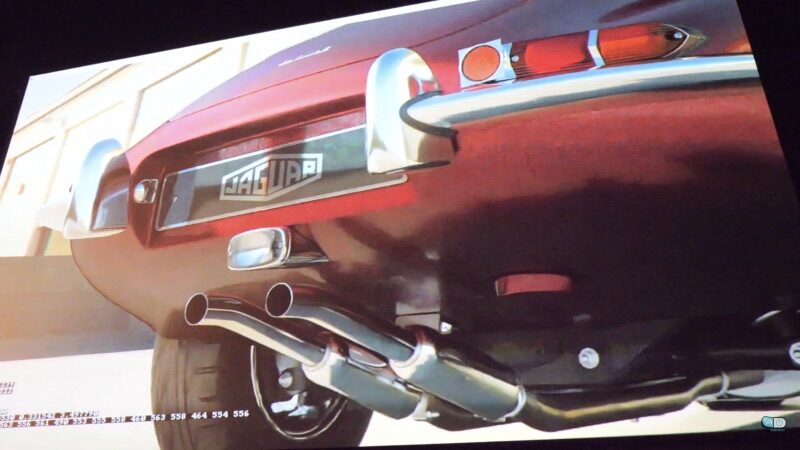 Another demo shows a McLaren P1 GTR sitting in a pit garage, and we actually get to see an Aston Martin DB11 driving around a white surface with ray traced lighting conditions.

“We are really excited that this technology has finally come to the real-time domain,” says the presenter. “At this stage, we are still exploring the possibilities we have with this technology,” and notes the demo is “not [on] PlayStation.”

That last bit is especially important, so don’t get your hopes up that this technology will appear in the next GT game, even if it is on PlayStation 5. 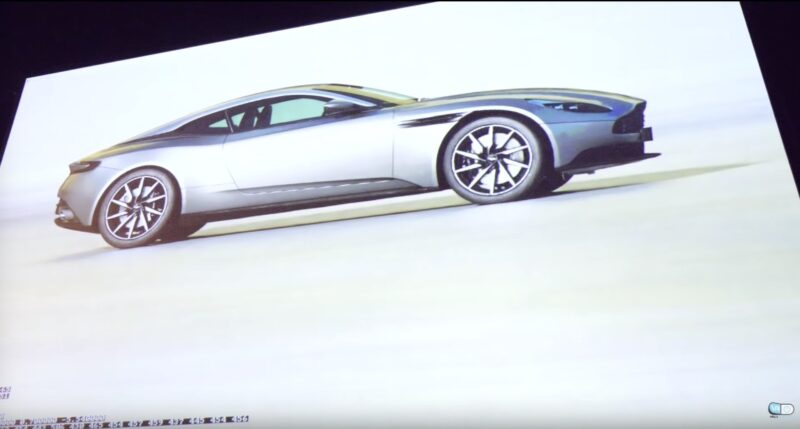 Real-time ray tracing is only just now starting to emerge on the highest-end gaming PCs, and the hardware required is still far too expensive to be considered practical for game consoles.

Nevertheless, it is exciting to see that Polyphony Digital’s software is ready for ray tracing once the hardware catches up. This video, even with its poor picture quality, offers a glimpse far into the future of Gran Turismo’s graphics. 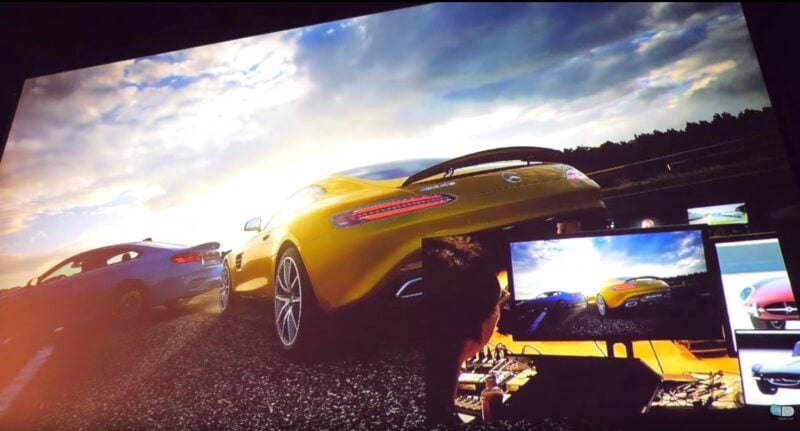 The other half of the video reveals the real-time video editing tools at the disposal of Polyphony Digital’s artists.

The presentation shows off GT Sport’s adaptive tessellation, and the presenter notes that all of the cars in the game have enough polygons and details for “8K rendering”.

We see special replay tools, which allow the presenter to dynamically change the car color, time of day, turn cars’ headlights on and off, and add visual effects like vignetting, motion blur, and color grading in real-time. 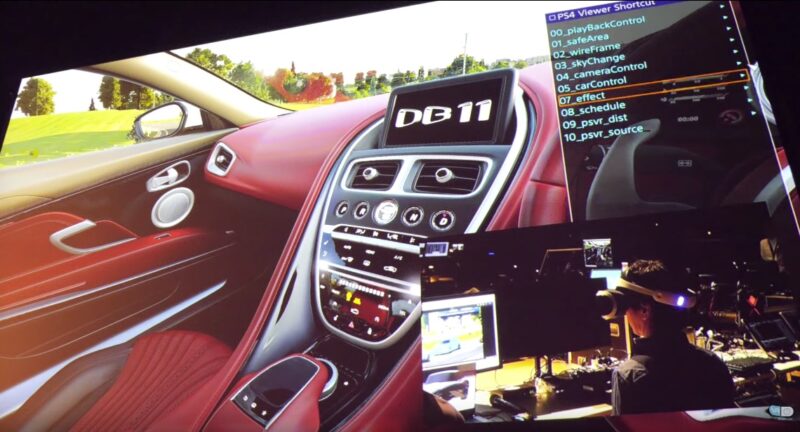 He also uses the controls to perform basic video editing, like adding new cuts and controlling the camera position. Although the editing tools are rough around the edges, it is easy to see the similarities with Photo Mode. Considering Kazunori Yamauchi’s passion for filmmaking and photography, it is not too far of a stretch to imagine similar video editing tools being made available in future iterations of Gran Turismo.