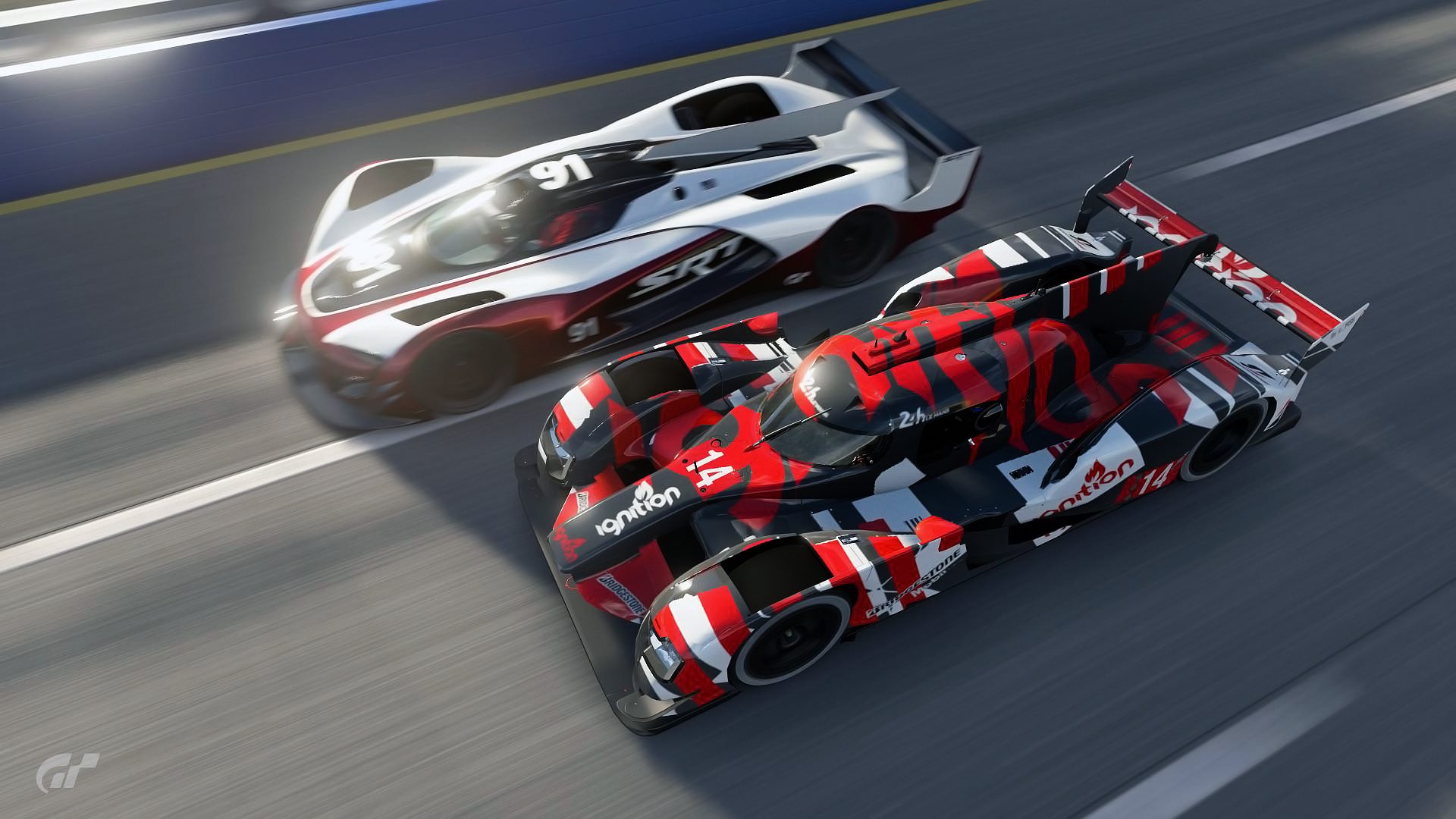 Late last month, Polyphony Digital responded to a common criticism of Gran Turismo Sport. “GT League” was just a part of the substantial 1.10 update, and it brought a more traditional single-player experience to fans.

As ever with these sorts of things, it’s a double-edged sword. Now that we’ve had some time with the new content, we’ll be taking a look at how GT League succeeds in broadening Sport’s appeal, and how it continues a handful of foibles that troubled the franchise last generation. 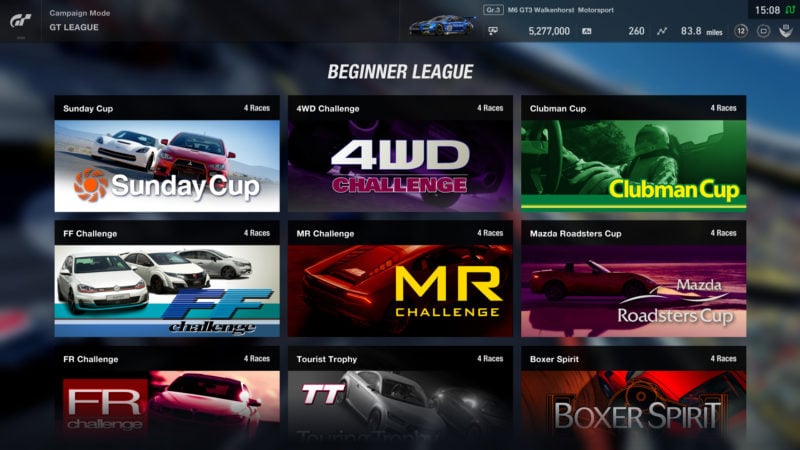 It’s been a bit of a common refrain here, so we’ll keep it brief: GT Sport is a very different beast to what’s come before. In the franchise’s two-decade history, it’s the biggest change in terms of focus. While Polyphony launched the game with single-player aspects like Circuit Experience and a new Custom Race mode, all of it was ostensibly there to funnel players to the eponymous Sport mode.

But not everybody wants to race against other humans. People play games, even racing ones, for a variety of different reasons. One of the more common ones? To win.

The fact is, unless you’re a consistent leaderboard-topper, you won’t be doing a lot of winning in Sport Mode. The SR/DR system is in place to promote players until they’re racing against others of roughly the same skill level. It’s great for those of us who want that sort of thing, but fun is subjective.

GT League provides another avenue of enjoyment, broadening the game’s appeal. It isn’t an either-or situation; a compelling offline mode can happily co-exist alongside an online platform.

Gran Turismo 6 players will be familiar with the concept of rabbits. They cropped up often in that game’s career mode. You’d start a race 30 seconds behind the leader, and while you’d quickly pass most of the pack, there’d almost always be one car way out in front, running at a pace the others could only dream of.

This setup is back in GT League. Once again races start in a long procession line, but the lead car isn’t impossible to catch.

It’s once you pass it that things get complicated. Suddenly the now-second-place car gets a dramatic surge in power, like it’s had a canister of NOS hidden under the passenger seat for just such an occasion.

In the Sunday Cup, a car that’s down 100hp will manage to keep pace on a straight. What’s more, it’ll rocket past braking zones; the most hilarious example being T1 at Nürburgring GP. Don’t take the inside line!

The AI will run the cars on the ragged edge once you’re in front. It can be entertaining, and admittedly, a bit more human. We watched an Alfa 4C exit every corner with all four wheels drifting as it tried its damnedest to catch up. A good fight for first can be fun, but the dramatic on-off nature of the current rubber-band approach makes it feel more artificial than intelligent.

GOOD: A Sense of Progression…

Ask a Gran Turismo veteran about their classic game careers, and then find a good, comfortable seat. More often than not, it’s going to be a story. Whether it was trying to beat the GT40 in an endurance in GT2, or the madness of Mission 34 in GT4, plenty of fans remember their path through the games’ GT/Simulation Mode.

These are, after all, video games. Titles like GT Sport and other sim-like franchises admittedly blur the lines; for some folks, the ability to experience cars and tracks they never will in the real world is accomplishment enough. Plus, GT Sport already has the PlayStation trophy system to provide a sense of progression — even if it could take you a long, long time to nab that platinum.

GT League is a little more old-fashioned. It offers a straight-forward, in-game bar for players to aim for. There’s no meta-game, no agonizing over a penalty you received due to an aggressive human driver. Tracking the ups and downs of your Sportsmanship and Driver Ratings just isn’t the same.

With the above said, there are certain limitations with GT League’s progression system in its current form.

For starters, there are no prize cars. One could argue that they aren’t really needed; the daily marathon feature means players get a random car every day after a handful of miles. And, as GT League arrived over two months after GT Sport’s launch, a large swathe of the playerbase would already have a sizeable garage.

But GT League also arrived alongside a dozen new cars. These range from cheap and cheerful (the Suzuki Swift) through to eye-wateringly expensive (the seven-figure Countach). What better way to encourage players to explore GT League — and pick up new cars — than tie at least some of this new metal to the races? We hope Polyphony takes an approach like that in future updates to the single-player campaign.

There’s also no championship points in GT League. Currently, every series feels like a spot race — something players can almost set up on their own in the game’s Custom Race mode. There’s one important difference, though…

GT League provides some of the best ways in GT Sport to make credits. Sure, if you just want to own cars, the daily marathon will (eventually) sort that out for you. But the in-game achievements value actually buying the cars, and we’ve already covered why you should pay attention to those.

The class-based nature of GT Sport means a lot of cars have the same price as others in their class. It also means you’re going to need a lot of credits to buy ’em all: over 92 million by our count!

Sport Mode won’t get you there. Fantastic as it is for close, fair racing, a money-spinner it is not. Those custom races won’t cut it either. But GT League and its handicap bonuses make earning credits a comparative doddle.

We’ve already detailed our best ways to use GT League to swell your Sport bank account. With these, you can experience different cars, learn their quirks, and gain credits for doing it. There’s no fear of ruining someone else’s race, or tanking your own stats. And, if it gets to be a little too easy, you can handicap yourself with a slower car. The result? Even more credits!

Let’s face it: buying a car feels a little better than winning it via the daily lottery spin. GT League makes this possible more often.

The great thing about GT League is that it isn’t set in stone. With GT1–GT4, Polyphony had to get everything all lined up prior to launch. There was no fixing, and there was no online racing to complement the single-player experience. The PS3 era brought that last bit, and when GT Sport launched, it leaned on it heavily.

Much like the game it finds itself in, GT League is a solid base. A rethink of the career was needed, and while it has a few weak points in its current form, there’s no reason to believe it won’t continue to evolve. As more cars get added — up to 500 by the end of the game’s life, we’re told — GT League can continue to expand, offering up more diversity.

Throw in some championship-style points structures, some of the fun Mission Challenges, and tweak the AI, and there will be a single-player aspect of GT Sport just as compelling and addictive as the current online action. Just look at how the game has evolved the last three months: now imagine what it’ll look like at the end of 2018.