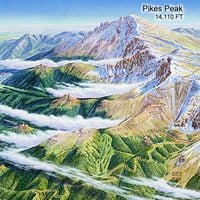 A bizarre post on the official Red Bull blog is raising quite a few eyebrows around our forums – and for a good reason. It’s a substantial discussion with Rhys Millen (rally driver and Tanner Foust’s co-star in the U.S. Gran Turismo PSP commercial) about the fastest way up the Pikes Peak rally course in GT5. Of course, there’s just one big problem with that: Pikes Peak hasn’t been seen in a GT game since Gran Turismo 2, and it’s obviously not on GT5’s track list (yet?).

In other words, this is either a severe editorial mistake or a not-so-subtle hint the legendary hill climb track is coming to the game. Adding to the intrigue, observant users in our forums noticed the first round of comments questioning the article’s accuracy were deleted early this morning, yet the article itself remains unchanged. More comments have been posted since then, but as of yet have not been removed.

This wouldn’t be the first time the Red Bull blog revealed information about GT5. As you may remember, they published an exclusive GT5 video last fall which revealed the X2010, the Lexus LF-A, and El Capitan (another track which did not make it into the game). After only a few hours online, however, the video was quickly pulled and I cooperated with Sony’s request to remove it from GTPlanet’s blog, never to be (officially) seen again.

Hopefully, with this additional exposure, we’ll be able to find out exactly what this odd article is about and why it exists. Stay tuned for more developments, and thanks to everyone who sent this in. Here’s a complete copy of the original Red Bull post as of December 30th, archived for posterity just in case:

Did you find Gran Turismo 5 under the tree? Getting frustrated by the Pikes Peak International course? Well, even if you feel you’ve mastered it, Rhys Millen has a few tips that might help even the most experienced gamer squeeze a bit more speed out of their console.

With a new class world record in a modified Toyota Supra at the 1998 Pikes Peak International Hill Climb in his pocket, there’s no doubt that Millen knows how to race to the clouds.

So, for gamers attempting to conquer the famed circuit in Gran Turismo 5, here are a few tips from a record setter on how to negotiate the 12.42-mile (19.99-kilometre), 156-turn course up the Colorado mountain that just might come in handy.

Millen says that the sheer length of the course on the mountain face is one of its biggest challenges. It rises almost a full mile — 4,721 feet to be precise (1,439 metres) — from its starting point on Pikes Peak Highway, which is already almost two-miles up at 9,390 ft (2,862 m), with both gravel and asphalt sections to keep things interesting.

“The hardest part about Pikes Peak is course memorisation, with its 156 corners over 12.5 miles — although many sections that repeat in look, they are totally unique in execution,” Millen said.

“Pikes Peak has several sections that repeat themselves in style and feel. The key as on any course is to know what’s around that blind corner and carry speed onto the straightaways.”

Millen recommends that gamers study the surroundings to help serve as memory markers to what’s coming up. A tree here or a boulder can help offer handy reference points for specific corners to help gamers prepare for what’s coming, something that’s been known to help a driver or two in actual race cars, he adds.

“As for picture painting, running most video-based course layouts will aid a driver in course recognition prior to laying sight on the course. This will also help in corner exit speed as to placing the car in the correct position on track.”

While Gran Turismo 5 gives an accurate reflection of the actual Pikes Peak circuit, there are some things that the video game simply can’t do. And, even though Millen sees the quality of the gaming experience increasing, he still thinks there’s nothing like the real thing.

“As far as a true dynamic sensation, the crossover from the virtual world to reality, although better, still has a large element of disconnect. This typically comes in the form of terminal speed,” he said.

In addition, the changing conditions typical at Pikes also makes things more interesting in the actual car: “You only get one chance around each of the corners and surface temp and grip levels change every minute in a mountain climate.”

But, having the next best thing isn’t so bad when you think about the fact that, as a gamer, you don’t have to deal with the sobering reality of cliffs and drop-off that are some of the biggest in the world — more than 2,000 feet in some spots — which would certainly not be fun to experience after a mistake.

That said, Millen insists that the prospect of diving over a cliff doesn’t scare him at speed in a race car.

“When you’re strapped in the race car your focus point is so intense you create tunnel vision blocking out the surroundings, cliffs included,” he says. “I get more freaked out driving up in the mornings before practice days in a rental car.”

Millen also offers some advice that applies to any mountain course that appears in any video game: “If you are travelling around the right face side or face of a mountain, you can pretty much bet the left hand corners are a larger radius and rights are tighter purely based on the nature of rain runoff and valley shapes. This is the opposite for travelling clockwise.”

And what favourite cars would he love to try out on the challenging circuit given the chance? Unsurprisingly, it’s a stable of high-performance rockets that he’d certainly push pretty hard up the mountain: Ferrari F40, the Ferrari 599XX and the Porsche Carrera GT.