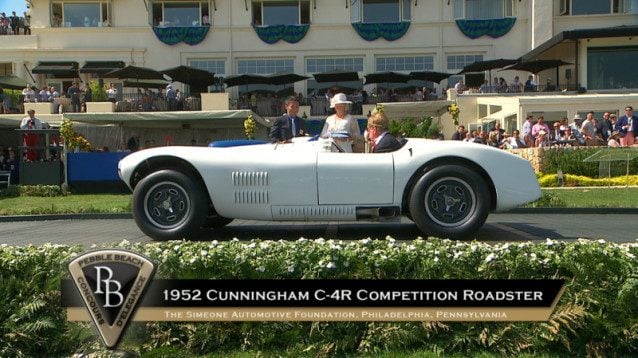 This year’s winner of the Gran Turismo Award at the prestigious Pebble Beach Concours d’Elegance is this 1952 Cunningham C-4R Competition Roadster.

Now in its 64th year, the Pebble Beach event celebrates the rare to unique historic cars, both well-kept originals and meticulously restored examples, in a pageant of motoring likened to the Olympics. Gran Turismo has been part of that history for the last eight years, with a special prize sponsored by Polyphony Digital for the car hand-picked by Kazunori Yamauchi for inclusion in a future Gran Turismo game.

The award has given us some spectacularly beautiful and noteworthy cars from automotive history, with previous award winners making it to Gran Turismo 5 and Gran Turismo 6, so this year’s winner will doubtless already be pencilled in along with its three predecessors for the next Gran Turismo game.

Winners of the Gran Turismo Award to date are:

So what of this year’s winner? 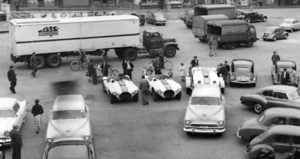 The Cunningham C-4R Roadster was one of three cars (two roadsters) built by Briggs Cunningham to win Le Mans with an American car and American drivers. Though this didn’t turn out the way that Cunningham had hoped, despite attempts from 1951 through to 1955, the C-4R was nevertheless a sports car weapon – finishing 84% of all races it started and winning 74% of them.

This particular car, part of the Simeone Foundation museum in Pennsylvania, is the most notable of the C-4R’s, finishing Le Mans in third overall (first in class) in 1954 driven by William Spear and Sherwood Johnston, 9 laps ahead of Cunningham himself in the sister C-4R. A worthy addition indeed!

Fans might note that the most recent three winners are also yet to appear in a Gran Turismo title, so it may be a little while until the Cunningham becomes digitally available. Nevertheless, we look forward to taking it to – where else – the Circuit de la Sarthe in the future!

Gran Turismo TrophyPebble Beach Concours d'ElegancePolyphony Digital
The original comments for this post are no longer available.
Can You Beat the Impossible Gran Turismo Quiz?

Automotive News 7 Jan 21 by Andrew Evans
Nobody loves safety quite like Volvo does. It’s a brand that’s been defined by safety ever since it invented the three-point seat belt and then gave away the patent to…

Automotive News 5 Jan 21 by Andrew Evans
There’s nothing quite so luxurious as exclusivity. Owning something that is literally one of a kind is the ultimate expression of status and wealth. When it comes to cars, there’s…