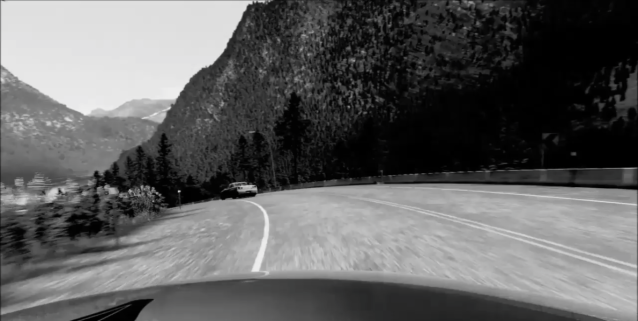 It looks like the heavily-requested Nissan R34 GT-R has secured a place in the Driveclub roster.

The title’s Twitter account teased racers with a short 8-second video showing the player’s car chasing down the Japanese icon in a clip with a monochromatic filter, something not possible in Driveclub’s current form. However in a further tweet Community Manager Jamie Brayshaw confirmed that the next update for the game will provide all filters that were previously restricted to photo-mode as options for visually modding the gameplay.

Driveclub director Paul Rustchynsky also quipped in a reply that you will be able to alter the intensity of these filters to find a level that isn’t too intrusive for your preferred driving style. Worth noting in this clip that the car being driven seems to be an R34 itself, with the offset NACA duct matching up to the real vehicle’s hood.

Without a doubt the most impressive aspect of this teaser is the inclusion of the R34. It is a car that fans were shouting for since the inclusion of the modern GT-R. Now with the confirmation of inclusion, it has further made Driveclub players realize just how far Evolution Studios have come since the launch of the title.

The addition of gameplay filters may not interest players who simply want to race but for the thriving photo-mode aspect of the game it could prove a popular addition to those desperate to find that perfect shot.

Driveclub’s next update is slated to land in February.