It felt oddly surreal to boot up Driveclub VR. The very development of this title seemed to be dead in the water only a few months ago after the untimely closure of Evolution Studios. Disbanded and revived in spirit over at Codemasters, Evolution still managed to deliver an encore that would show PS4’s most visually ambitious title on Sony’s most ambitious peripheral, but does it hold up as well as you’d imagine?

In many ways, yes. Driveclub’s overall aesthetic remains intact with the brilliant lighting engine and realistic atmosphere replicated almost perfectly from that of regular Driveclub. The in-game menus are also a direct drop from the original game with the added tweak of being able to use the motion tracking of the PSVR to manipulate the view of these menus. Make no mistake, this is Driveclub right down to the streamlined design choices and feel of the environments. 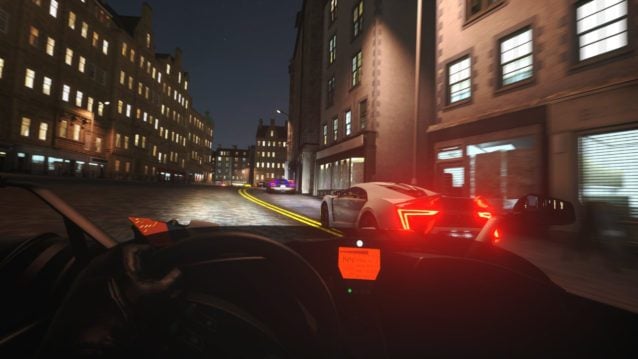 However, where Driveclub was able to be sold on how jaw-droppingly pretty it was with it’s dynamic time-of-day and weather, DCVR feels more sterile and controlled — more akin to launch-state Driveclub than what the title became with its additional support.

As a result, those complaints at launch from the gaming media regarding how Driveclub was ‘just another racing game’ and ‘all too common’ return from a face-value level. If you really didn’t like Driveclub in its original state, there’s a good chance you won’t enjoy what DCVR will have to offer.

However, DCVR isn’t just another Driveclub title, its purpose is to make you gasp and woop at what Virtual Reality can offer. Evolution Studios aren’t trying to improve the original but create a spin-off that proves just how good racing in VR can be. Which, as it turns out, is amazing fun.

The demo placed me in a Ferrari F12 Berlinetta taking on a single race in Old Town, Scotland — Driveclub’s final location added via DLC. Graphically, Driveclub VR lacks the oomph that the original can rely on. I did expect a technical downgrade given DCVR needs to hit 60fps (which is then upscaled to 120fps) to make the VR experience a pleasant one.

The graphics are a bit grainy on the PSVR display and slight artificating is visible throughout. With the already active strain on your eyes dealing with playing in a virtual reality environment, it certainly doesn’t help having to squint a bit to see what’s ahead on the track. 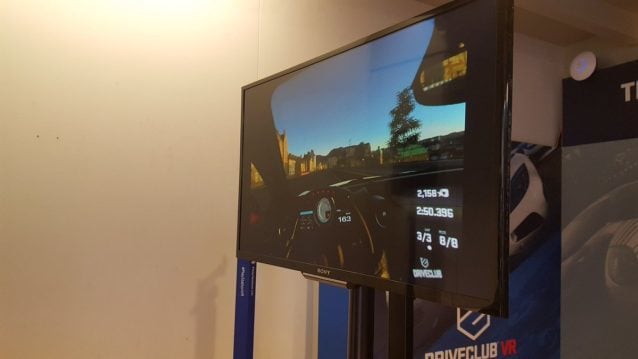 Your perception of the track feels a bit more limited than you’d ideally expect from ‘Virtual Reality’: I found that relying on previous knowledge of the track made the driving easier than relying on what I could actually see.

This slight impairment is made worse unintentionally with Driveclub’s beautiful lighting engine when the sun bears down as you blast through the final left turn. If not for the slightly disappointing display and field of vision this would have been my favourite part of the demo, as I literally found myself turning away from the sun to focus on the road ahead – something not possible without the headset.

Moments like this were plentiful in the demo and it’s why Driveclub is a shining light (quite literally) in proving the level of immersion VR can bring.

All things considered, the key goal of Driveclub VR and the technology in general is to make you feel immersed and natural in your playing environment by breaking down typical environmental walls that interrupt your gaming experience and in a good few ways this is achieved.

As soon as I started the race, I felt like I had always raced in Virtual Reality. I leaned into corners, adjusted to the weight transfer from the car and looked over my shoulder to see if anyone was cutting down my inside. It was outstanding. Combined with the wheel and motion rig set-up, my body felt like I was racing. At no point did I feel that the in-game camera let me down or the PSVR was impeding me. It felt remarkably similar to what PlayStation Access described when they took the game for a test drive of their own in August.

It was as organic as the experience can be, and it didn’t feel like I was wearing a £350 piece of tech but rather an extension of my limbs and senses. Unfortunately, what I felt was totally different from what I was seeing and hearing – and this is where Driveclub VR fails on no fault of it’s own.

Despite relatively decent head-phones being part of the set-up, It never truly sounded like I was driving uproariously through a Scottish town, nor pushing my car to the edge. The perception of sound was exactly as you’d expect when listening to anything less than a surround sound system. Every sound being deployed in stereo direct to your ears, too linearly to be taken seriously.

The key components are definitely there in the game but matched with a feeling that the graphical assets such as the textures and aliasing are more ‘last generation’ than ‘current generation’. With that, it just heightens the idea that nothing you do in-game has consequences, just like playing a regular video game on your TV. So, as soon as the 3rd lap started that’s what it became. I was back to playing Driveclub as I would in my home, not afraid of what may happen if I push the car too far since the reset option is only a button-press away.

Virtual Reality went from a new experience to a simple enhancement instantly, and not one unattainable by a head-tracking type system seen in 2010 on Gran Turismo 5.

Driveclub VR’s physics were mostly in-tact from the original game, albeit a bit easier. Throwing the Ferrari around didn’t require much effort and it felt harder than usual to make it lose grip and spin. I understand this may be down to it being a public play demo build and Driveclub’s regular physics can be slightly unforgiving. Whipping the car around was a blast, however. I definitely enjoyed what Evolution have put together on the gameplay side.

Driveclub VR is a familiar racer that impresses with it’s incredible cockpit cam and intense lighting engine. The content on display promises to keep players busy with an entirely new tour mode and 80 cars lined up for VR early adopters to play around with. The gameplay remained largely unchanged with the exception of it feeling a lot easier to control than the original game but as stated I feel this could be down to it being a public demo as opposed to the full title.

For those intending on purchasing PSVR, the various performance niggles heightened by the hardware shouldn’t get in the way of enjoying the immersive title Evolution have put together. Driveclub looks to go out on a worthy note, showcasing one of Sony’s most experimental hardware efforts yet.