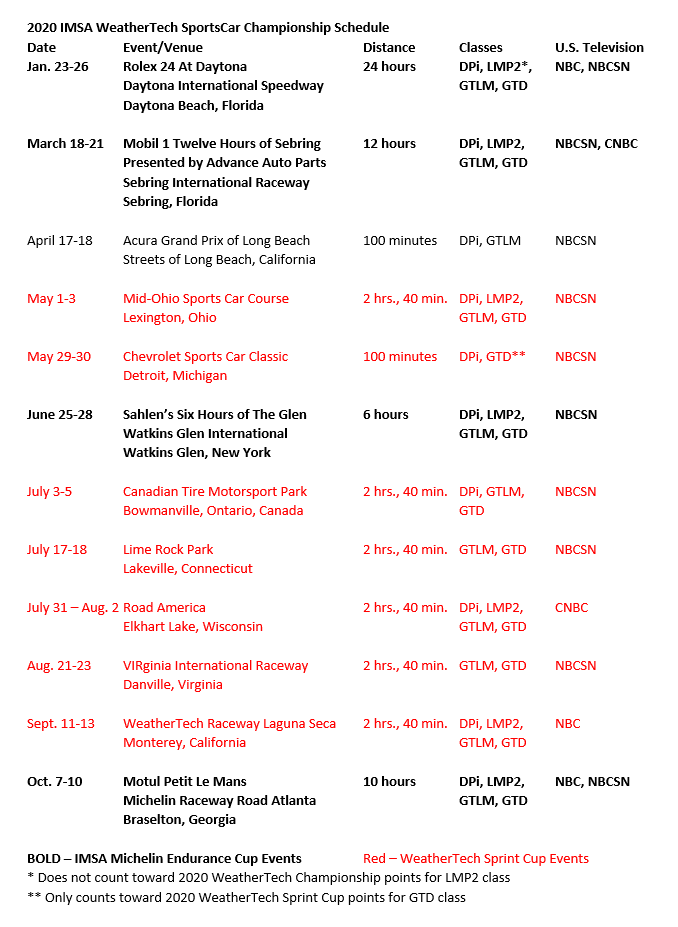 I'm always happy for the IMSA season but the "behind the scenes" budget issues and the general lack of manufacturer interest is a bit scary/sad.

Interested to see what Doonan does with it, and if he can help steer the series back to better racing than last year.

Misha Goikhberg and Alvaro Parente to the Number 57 Acura NSX.

Is it unusual for the prototypes to be absent from Lime Rock?

MIE1992
Is it unusual for the prototypes to be absent from Lime Rock?
Click to expand...

They've been doing it that way since 2017, from the look of things. Prototypes used to run there in both the pre-merger days with both Grand-Am and ALMS, as well as in the combined championship when the series came together.

I think when the fields expanded overall with the move to the new DPi class, and larger GTD fields, it forced their hand. Just not enough room on that small track layout for all those cars.

Pfaff has confirmed their return with backing from Motul.

GTD is going to be insane this year so long as IMSA doesn’t mess up the BoP.

Yes! So glad Pfaff is keeping the plaid.

It's such a shame they can't find (or don't want?) the funding to run a full program. Such a great team. I still can't believe Ferrari doesn't get more behind the Risi/Corsa teams for LeMans, etc.

It's a shame Ferrari and Aston Martin can't be bothered to give factory support in North America for GTLM/GTE...

Grasser has confirmed a seco d car for the NAEC plus it seems they are possibly taking over the Magnus program as well.

JDC has confirmed they will field a second DPi for at least the NAEC with Leist as one of the drivers.

And WRT will be at Daytona once again.

Not sure who he’ll partner with. I really hope he can make the rest of the MEC rounds in 2020.

If I’m remembering correctly, last time SVG ran at Daytona, he put in some absolute mega stints in a Porsche who’s rear wing was basically falling off. Handful through the corners, wicked fast in the straights

I think the real question is if AIM/Vasser will get an attractive paint scheme or keep the eye-sore they've been using.

TheElbows
I think the real question is if AIM/Vasser will get an attractive paint scheme or keep the eye-sore they've been using.
Click to expand...

As someone who actually worked with this livery for a sponsorship pitch, I can pretty much confirm it will not change for 2020 unless a major sponsor steps in and asks that it be changed to reflect their brand.

Edit: In other news

I actually like the AIM paint scheme, although I do wish they would run 1 car black/yellow and the other silver/black/yellow. 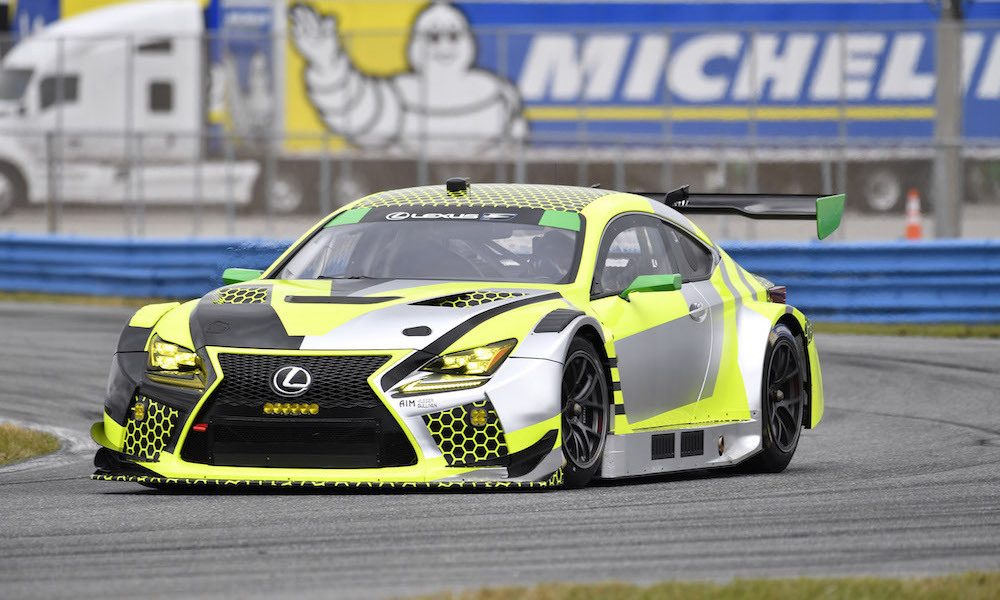 Ether
Edit: In other news

Sadly that's not very surprising, it seems nothing went their way last year and for a team with a tight budget that's pretty much a death sentence.

In brighter news, Magnus isn't completely going away as the team will continue under the GRT umbrella.

Nicky Catsburg is new endurance driver for the #3 Corvette. Marcel Fassler returns for the #4.

Not to sound mean, but the DPi list at least includes most of the "actual" competitive cars. We lost a few of the also-ran Cadillacs, and the Nissan. We only really lost one proper Cadillac DPi (the France-funded Action Express car). The legitimate competitors are more or less still there.

GTLM is definitely slightly depressing with only seven cars, but at least Risi is there. Sad to see no one could put together an Aston Martian (edit: That's a typo...but I'm leaving it in because...it sounds cool). GTLM effort for IMSA. That would have filled the Ford gap nicely.

GTD looking okay, but not stellar.

LMP2 looks good, but those guys are just enduro-mercenaries hunting for big wins and that field will be non-existent at the other races (some of which I believe have actually been taken off the LMP2 calendar). Seven cars is more than enough for a solid Daytona fight though.

So IMSA 2020 is basically a GT3 show. At least I know what to try and pay attention to

Heck the past couple of years the GTD class has been consistently enjoyable to watch.

I'm still concerned for IMSA this season. The LMP2 field is healthy now but will shrink for the "regular" races. Add that to the smaller DPi field (which I will argue till I'm blue in the face should never have been separated in the first place) and prototype racing may be moving in the wrong direction.

GTLM is going to look bad once Risi drops out for the regular season.

GTD looks to still have some nice variety and hopefully the racing will be good as it usually is. I don't see the McLaren of Compass Racing in the Roar list, but hopefully they will be in the field for the actual race.

raven214
I don't see the McLaren of Compass Racing in the Roar list, but hopefully they will be in the field for the actual race.
Click to expand...

I'm pretty sure Roar is mandatory. If they don't show up for the Roar, they won't be eligible for the 24.

If I remember correctly Roar is optional unless IMSA requires your specific team/car to attend (in order to get performance data for BoP). Teams which are not summoned are allowed to come and partake for additional testing. At least that's how it's been in the past years. So if you're in the same team/car for a couple years it is legitimate that you chose not to show up for Roar. In some extreme circumstances teams can't even make it because of car delivery issues - not sure how that's handled.

With regard to IMSA, I think DPI is screwed in a few years anyway. Many teams/manufacturers do not want hybrid (since the industry is essentially skipping from hybrid to full electric cars - and full electric racing is nowhere near ready for IMSA style performance). It's also expensive and would lock them into hybrids for maybe 5-years, in which time that tech would be old news.

Numerous manufacturers want DPI to match up with Hypercar....but Hypercar budgets (while theoretically less than LMP1) will still likely be 2-3-5x as much as a current DPI would be, meaning the smaller teams might disappear if they go to a common formula. Also, WEC/ACO/FIA have the huge advantage right now with three major and one minor manufacturer on board for Hypercar in the first few years. IMSA would not be negotiating from a point of strength.

For some platforms, IMSA is currently more expensive than WEC or ELMS (mainly because of the length of schedule and the travel I suppose?). Generally they're in a bad way, with many manufacturers wanting to drop out of motorsport or go all-electric (and again it's simply not ready for prime-time to replace the major motorsport series).

The IMSA racing could be great this year, but they'd have to nail the BoP, something they did extremely poor with last year. We have enough cars for good racing, but not if they are too far apart in BoP (which is tough, particularly in the first two major races).

I wouldn't be too concerned. Sportscar racing has always had field sizes shrink and grow over the years. I think those who found IMSA/Grand Am in the early/mid 2010s where we had capacity grids at some tracks was an exception within the series, not the rule. I think 40 cars for the Rolex 24 is a healthy number. But as TheElbows points out, the looming changes regarding DPI/Hypercar for 2022 will probably, to some degree, keep a few teams on the sideline for 2020/2021 until the rules are solidified and budgets can be set.

raven214
GTD looks to still have some nice variety and hopefully the racing will be good as it usually is. I don't see the McLaren of Compass Racing in the Roar list, but hopefully they will be in the field for the actual race.
Click to expand...

Compass only ran the Sprint schedule last year and skipped the enduros. If they do the same this year, then they wouldn't really need to test at Daytona.

Yeah GTD still has access to either the endurance races, the sprint races or the full package - right? It's meant to provide more budget-friendly options for the PRO/AM nature of the GTD teams. 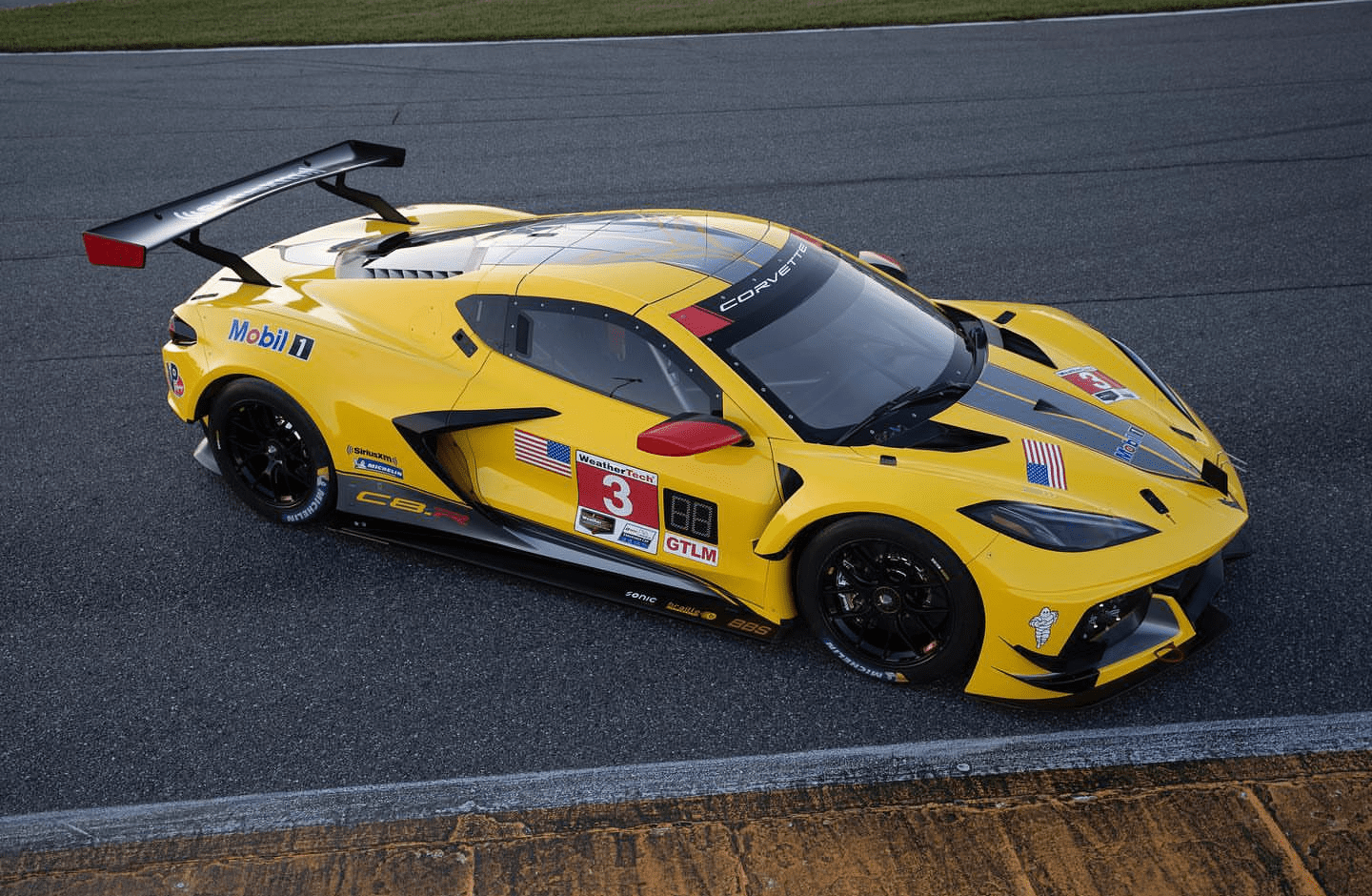 Nice, looks far better as a race car (as expected!). The livery works. Still has the generally vague MR layout aesthetic, but I don't think you can get very far from that.