EuroGamer’s Digital Foundry closely examines the graphics in today’s video games, offering highly technical analyses of all the 3D imaging techniques which developers use to build the software we play. They’ve carefully documented the performance of GT5 Prologue, the GT5 Time Trial (which hosted GT Academy 2010), and GT5 itself. 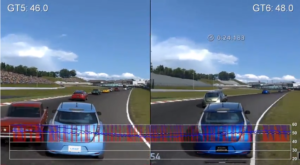 With the recent release of the Gran Turismo 6 demo, they’ve turned their attention on Polyphony Digital’s latest creation, but are not especially enthusiastic about their test results.

Although they are impressed by the game’s higher resolution (1440×1080) compared to GT5, many of the game’s graphical features do appear to have come at the expense of frame rate – especially in “cockpit view” – as can be seen in the graph displayed in the video above.

At E3 2013, Kazunori stated that his team has “pushed the PS3 as far as it can go,” and his comments appear to have been verified.

Based on what we’re seeing in the GT6 demo, resolution gets an impressive boost – up 12.5 per cent to 1440×1080 – but multi-sampling is gone, eschewed in favour of post-process MLAA. In effect, Polyphony is reallocating resources – moving anti-aliasing over to the Cell’s SPUs, and giving the RSX graphics chip room to breathe, allowing for the increased definition in the core imagery plus the implementation of other new rendering features.

The bad news is that the re-balancing isn’t quite as successful as we would have hoped. 1080p performance is far more variable compared to Gran Turismo 5, with smoothness visibly compromised by slowdown and judder – issues which are more prevalent when using the external chase cam and cockpit viewpoints and when transparent alpha effects (smoke and particles) are in play. Performance in the cockpit view is particularly worrying, with some regularly heavy drops in smoothness genuinely spoiling the gameplay experience when played this way.

Many users in our forums have noticed frame rate issues themselves, which Digital Foundry recommends can be avoided by running the game at 720p resolution:

The closest thing we have to a cure-all for these issues is to disengage 1080p resolution on the PlayStation 3 XMB and downgrade to the 720p display mode. Outside of a few dips in frame-rate caused by the appearance of alpha-based effects, GT6 manages to deliver a very solid experience in 720p, minus some occasional judder when the engine is being put under load. The use of different viewpoints has little impact on smoothness and for the most part we are looking at a mostly locked 60FPS update – cockpit view still has a hit on frame-rate, but it’s nowhere near as pronounced as it is in the 1080p mode.