Sony Europe’s PlayStation Blog has just confirmed that both the Standard and Anniversary editions of Gran Turismo 6 will be available as a digital download in the PlayStation Store.

You can pre-order either digital version of the game in the store now, and you’ll receive the “Precision Pack” for free, which includes the following cars:

Of course, you can still pre-order GT6 from Amazon or GameStop if you prefer the Blu-ray disc version of the game. 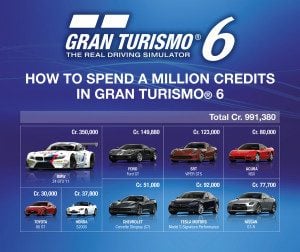 The announcement also confirms that in-game credits will be available to purchase on the PS Store and video game retailers in 500,000, 1 million, 2.5 million, or 7 million denomination packs.

According to the digital version announcement on Polyphony Digital’s Japanese website, GT6 will be delivered as a 15GB download, which will consume 30GB of hard drive space on the PlayStation 3 once fully installed.

Although GT5 Prologue and GT PSP were both available as digital downloads, this will be the first time a flagship Gran Turismo title has been released in a digital format, and the first time Gran Turismo game credits can be purchased with real-world currency.

Click here to discuss this latest announcement in our forums.