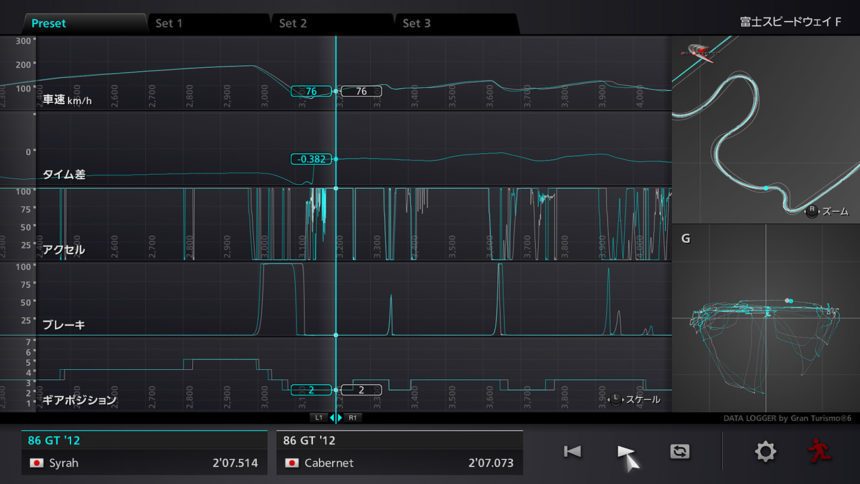 GT6’s next update will be with us next week and brings with it the latest effort in blurring the lines between the game and real life – “GPS Visualiser” – demonstrated in the official video above.

The feature takes circuit driving data recorded by compatibly equipped cars – essentially anything using a GPS-enabled CANbus, though initially limited to a Toyota system – and converts it into GT6 replay data. This will allow GT gamers to race ghosts of laps set in the real world, opening up a world of real vs. simulation race possibilities.

The feature makes “Gran Turismo 6” the first officially compatible application with the Toyota’s “Sports Drive Logger” which goes on sale from June 2nd. This tech has been in development since 2007, while GTPlanet site owner Jordan got a chance to experience an early build at Willow Springs in November 2013.

For those not into ghost-chasing, the resulting performance data can be combined with the Data Logger feature of GT6 to analyse the throttle and brake positions of the real drivers to improve your own times.

At this time it’s not known what else will be included in the v1.06 update, but we’ll bring you more news as it arrives. In the meantime, check the relevant thread in the GTPlanet forums for more information and discussion.

GT6 Updates
The original comments for this post are no longer available.
F1 2020 Review: A Winning Formula

Gran Turismo Sport 770 Aug 3 by Andrew Evans
Given the speed at which 2020 has been passing, it might be hard to believe that it’s the 31st Monday of the year. Nevertheless, a new Monday means a new…

Gran Turismo Sport 770 Jul 27 by Andrew Evans
Monday is upon us yet again, and that means there’s a new set of GT Sport Daily Races for players to get their teeth into. In keeping with some recent…

Gran Turismo Sport 770 Jul 20 by Andrew Evans
It’s the start of a whole new week (yes, another one; sorry), which means that — along with many of us heading back to work again — there’s a new…