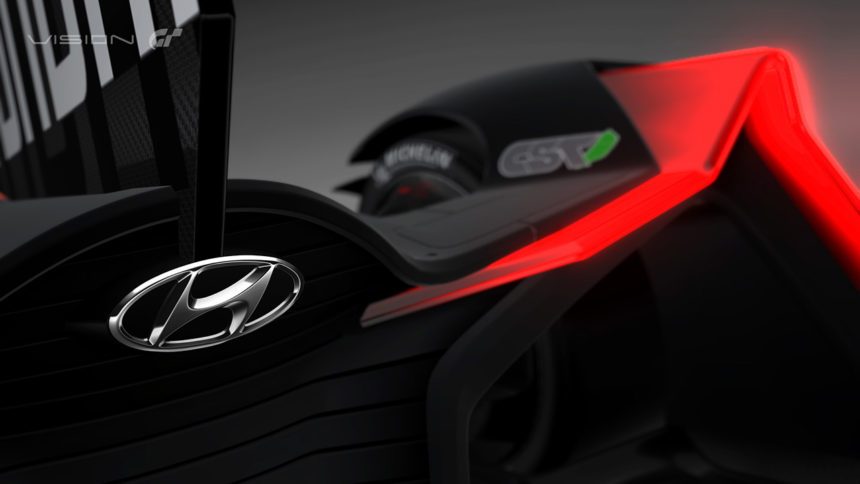 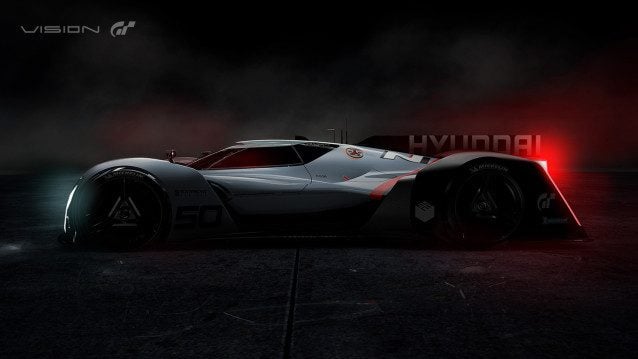 While all the chatter is concentrating on Bugatti’s Vision GT car, Hyundai’s is skimming under the radar a little. That’s changed today with some more teaser images of the company’s addition to the “edge effect” project’s stable. 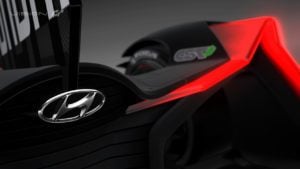 First impressions of the N 2025 were that it resembled an LMP-type car and that latest pictures cement those thoughts. The profile shot is distinctly Le Mans Prototype in form, but interestingly the car seems to lack any kind of horizontal wing element at the rear. This is very reminiscent of the Mazda LM55 Vision GT – a car whose manufacturer was so fond of, it was placed on the Goodwood Festival of Speed central feature this year.

The rear detail shot reveals a very large duct behind the rear wheel exiting backwards, which suggests at a wingless downforce solution similar to the Nissan GT-R LM P1.

We still don’t know what’s going to power the Hyundai car, but the Vision GT project has a strong track record of pairing potent petrol engines with a significant electrical assist component. This would be ideally suited to an LMP car too.

Like the Bugatti, Hyundai’s Vision GT car will be revealed in full at the IAA show in Frankfurt on September 15th and it’s one to which we’re very much looking forward!

Taken by this departure from Hyundai’s norm? Join in the discussion on the forums!

HyundaiVision GT
The original comments for this post are no longer available.
Test Your Badge Knowledge With Our Car Logo Quiz

Gran Turismo Sport 1220 Mar 1 by Andrew Evans
It’s the first of the month and the start of a new week, and there’s another set of new GT Sport Daily Races to keep us all occupied for the…

Gran Turismo Sport 320 Feb 25 by Andrew Evans
GT Sport players have a new set of Time Trials for the next two weeks and, after the slightly unusual and seemingly unplanned change last time out, things are back…

Gran Turismo Sport 202 Feb 24 by Andrew Evans
The latest game update for GT Sport has arrived. Weighing in at 176.8MB it is, as expected, not a major content update, but it does bring along some interesting changes…

Gran Turismo Sport 1220 Feb 22 by Andrew Evans
A new set of GT Sport Daily Races has arrived, and the next seven days will put you in racing action at circuits — real and fictional — around Europe.…

Gran Turismo Sport 202 Feb 19 by Andrew Evans
Somewhat unexpectedly, there’s a new update coming to GT Sport this month. It’ll be the first update to the game this year, following on from the 1.62 update back in…

Gran Turismo Sport 2624 Feb 18 by Andrew Evans
Updated February 20: Since we posted the details below, all corresponding information has been removed from the official Gran Turismo website. We’ll update this article with more information as we…

Gran Turismo Sport 1220 Feb 15 by Andrew Evans
The latest set of GT Sport Daily Races, running for the next seven days, will see you recreating the golden era of rally in a rather unusual event — as…