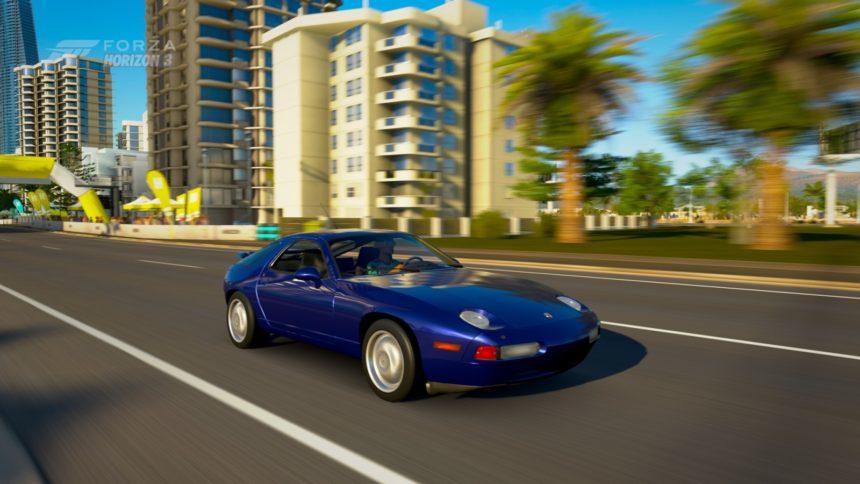 It appears the stream of Porsche prizes will continue in Forza Horizon 3 after all. Players have spotted two of the Stuttgart marque’s models in the game, and they’ll be up for grabs soon.

Earlier this week, Turn 10 pushed out an update for FH3. With no August car pack — only the FFXV-sourced Regalia land-yacht — the 795 MB update seemed large. As it turns out, it not only included the Regalia, but a trio of Porsches.

Of the three, players already knew of one: Turn 10 confirmed the #45 911 GT3 RSR at the beginning of the month. The 914/6 is a small surprise, but has appeared in multiple XB1-era Forzas already. That’s not the one that caught our eye.

The 928 is a genuinely new car to the franchise. The V8 grand tourer was spotted in a development version of the game months ago, and has already shown up on the Forza Motorsport 7 car list. Community member Vic Reign93 first spotted the cars in the Horizon Promo section of the game, which lists every car.

Thanks to Microsoft pushing out the achievements for August’s Forzathon events early, we now know both road-going Porsches will be available as Forzathon prizes August 22–28. Both will require VIP status though, judging by the event descriptions:

Non-VIPs, don’t fret yet. It may be possible for you to win the cars if you use a shared car from a friend. It’s simply unclear at the moment.

Meanwhile, in general Forzathon news, this weekend’s events have just gone live. Stay tuned for our breakdown of them later today.

Forza Horizon 4 13 Sep 29 by Michael Leary
It’s full speed ahead as the Xbox Series X launches on Tuesday, November 10. If you were unable to secure your own during initial pre-orders, there’s still a chance yet…